GEOMETRIKO is a skill game, written in html5, css3 and javascript, developed by a friend of mine which captured my attention some days ago'. It's available now in a demo version at this url, give it a chance because it's really an enjoyable game. It can be surely improved in some details, comment here if you have ideas or suggestions that can be useful for the developers. 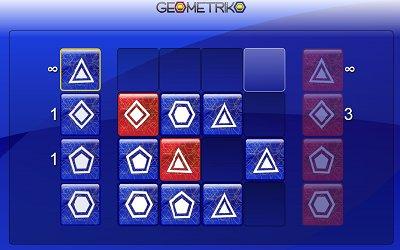 GEOMETRIKO is a turn–based game played on a 4x4 grid, and features four different tiles, aka Tiers, arranged in ascending order. Each player starts with an infinite number of Tier–1 tiles. Every time a player makes a three–of–a–kind he performs a Trip on the board; once a Trip is made it is removed from the board and the player is awarded an upgraded Tier. Making a four–of–a–kind, a Quad, gives the player two upgraded Tiers. If a higher Tier is put next to a lesser one, the lesser one switches side.

A player can win a match either by filling the entire board with more of his own tiles than his opponent’s, or by achieving a Trip/Quad of Tier–4 tiles.